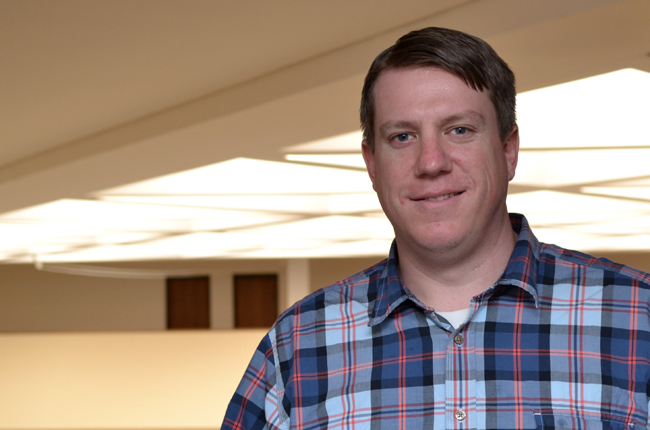 Eric Needham loves the outdoors. Walking through a forest, he can tell you the names of trees and identify the genus of a bark beetle.

So you would think a career in forestry would be perfect for him, and in fact Eric earned his undergraduate degree in Forestry. Soon after graduating, he took a job at the USDA Forest Service at the Forest Science Laboratory in Corvallis, Oregon.

After being rained on, snowed on, covered with poison oak and attacked by yellow jackets (“They don’t die after they sting, you know. They just keep coming back again and again.”), Eric decided he needed to rethink his career plans.

He soon  found a job at the University of Oregon bookstore and began taking a few courses in accounting at the local community college. He’d always been good at math, and accounting had a great earning potential.

In 2011, Eric and his wife, Hilary, moved to Central Illinois, Eric’s original home. Eric took a job at UIS in the Campus Services Mail Center, and he’s been here ever since.

Eric took a few courses and even applied for the Accounting program, but he didn’t get very serious until July 2013, when his daughter Ada was born.

As he held her in the hospital, looking down into her tiny face (“a miracle”), he thought, From now on, all decisions I make in my life aren’t really for me. They are for my child.

Knowing that a baby brought with her “a never-ending list of expenses,” Eric decided to get serious about his degree.

And he has taken two to four classes every semester and summer since that time, and now he has only his capstone course to finish before graduating in May, 2016.

Eric says his time at UIS has provided him with many other memorable experiences. He especially enjoyed his classes with Kevin Purcell on Business Consulting. Eric says, “I have told everybody about this class and feel everyone could learn something from him regardless if they are pursuing a business degree or not.”

He has also appreciated Dr. Carol Jessup’s ability to get across difficult auditing information. “She can really get hard concepts into students’ heads.”

An important buffer for the Needham family finances

Eric says he would have taken more courses in Oregon but finances prohibited it. Working full-time at UIS, Eric is entitled to a tuition waiver, and that has been an enormous advantage.

Scholarships have also been important to Eric as he has worked toward finishing his goals. This year, he received four scholarships:

Of this scholarship help, Eric says, “I really cannot thank the donors enough for their generosity. Because of them, I have not had to worry about how to purchase my extremely expensive accounting textbooks.”

The scholarships, he says, have also provided a very important buffer for his family as he seeks to improve his earning potential.

As busy as Eric has been—a family, a job and a heavy college load—he still finds time for service at UIS. He has participated on the Civil Service Advisory Committee and on the Campus Senate Committee on Diversity, Equal Rights, Opportunity and Access.

“Both these groups provided me with tremendous opportunities to become involved at UIS beyond just education and employment,” Eric says.

His service, clearly, has been valuable. In February, he was named the 2015 Employee of the Year at UIS.

Upon being presented with the award, Eric was honored for his excellent work ethic and reliability, but as the people on his mail route can attest to, he is also known as one of the nicest people at UIS.

But whatever Eric does, you can be sure he will be happy to avoid meeting any more yellow jackets up close and personal!

At UIS, anyone can make a gift that adds to the size of a scholarship award. We welcome your gift in any amount to the Crowe Horwath LLP Outstanding Accountancy Scholarship, the UIS Staff Scholarship in Memory of Mike Love and the Donald F. Stanhope Alumni Scholarship in Accountancy. Use the links to give safely online.