Above: Caitlin Crane (’13 CBM, MS ’15 LIS Urbana) at work in Archives and Rare Books at the Bernard Becker Medical Library.

Sitting in a car one day with her mother, just before her first year at UIS, Caitlin Crane wondered aloud about a career.

“You should be a librarian,” her mother said.

“Ummm….” Caitlin took a moment to soften her response. “That doesn’t quite sound like me.”

Today, following an undergraduate honors program at UIS and a master’s degree from the University of Illinois in Urbana-Champaign, Caitlin is the Project Archivist at the Washington University School of Medicine’s Bernard Becker Medical Library in St. Louis.

In other words, a librarian.

A mélange of majors for Caitlin

Perhaps her mother knew that Caitlin needed a job that would satisfy her wide range of interests. Consider Caitlin’s academic program at UIS.

She majored first in business—specifically Management Information Systems (MIS)—”because that would give me a springboard to a variety of career fields.”

She soon changed her major to Business Administration, keeping MIS as a minor and adding a second—and unexpected—minor in English.

“The Capital Honors program’s focus on interdisciplinary work made me want to take classes outside of my wheel house.” She laughs now, thinking of how that decision stretched her. “Outside of my computer classes, Creative Writing with Meagan Cass was one of the hardest classes I took at UIS.”

Caitlin expanded her undergraduate experience by taking advantage of UIS’ long history of support for internships. Her first was an internship at the Illinois State Museum’s Research and Collections Center Library.

“Maybe I was thinking of my mother’s words,” she says, “but I wanted to get an introduction to working in a library.” For this internship, she shelved library materials, did some cataloguing, and gained exposure to the many different kinds of library work available.

After a stint at United Way of Central Illinois to explore the possibility of nonprofit work, Caitlin took a third internship at the Abraham Lincoln Presidential Library, working with their historical collections.

“I loved the historical narratives that came out of the different pieces I was working with, and I really liked doing the reference work—helping people answer questions.”

Here’s one question Caitlin researched: The Naval Academy called the Library one day. President Obama would be visiting one of their ships, and the Academy wanted to welcome him aboard ship in the same way Abraham Lincoln would have been welcomed aboard. Caitlin worked with the curator to figure out what was involved, using a book that broke down every day of Lincoln’s presidency.

Do you see how this work would stoke an insatiable curiosity?

Okay, Caitlin thought. This is something I want to do. I really enjoy this.

While at UIS, Caitlin worked at the Office of Student Life. Her income allowed her to do unpaid internships. Scholarships also helped.

All four years of her undergraduate program, Caitlin received the W. Robert and Patricia W. Felker Scholarship, created by the Felkers to encourage academically successful students and enhance their experience at UIS. W. Robert Felker graduated in 1974 with a degree in Political Science. In 1997, Bob received the University of Illinois Alumni Association’s Alumni Achievement Award in recognition of his outstanding career in banking.

While at UIS, Caitlin also received the Anna May and Charles C. Smith Scholarship, the Eugene R. and Elaine A. Wilkinson Scholarship, and the Springfield Area Chapter of the State Universities Annuitant’s Association Scholarship Fund.

“My scholarships were a big part of the reason I chose UIS,” Caitlin says. “I always thought I would just know the right place to go to college, but I had no idea when the time came to choose. The scholarships brought me to UIS.”

She’s deeply grateful for the scholarships and wants to say, Thank you so much!

Caitlin knew she needed to develop her leadership abilities, so almost right away she joined the Women’s Issues Caucus. Elected chair, she decided to partner the Caucus with the local chapter of the American Association of University Women. AAUW members encouraged Caitlin to apply to the National Student Advisory Council, through which Caitlin attended the National Conference for College Women Student Leaders (NCCWSL). 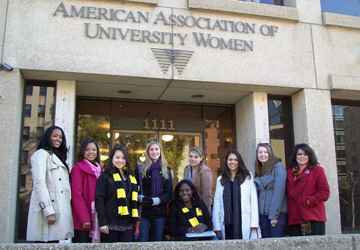 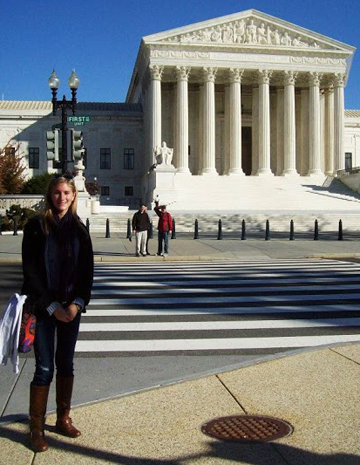 Left: Caitlin (fourth from left) with other members of the National Student Advisory group at the fall retreat; below: Caitlin before the Supreme Court in Washington, D.C.

Caitlin also took responsibility for co-organizing a relief trip for 18 students to Joplin, Missouri, after the terrible (EF5) tornado in 2011.

“Both of these activities were very much outside of what I would have expected of myself only a few years earlier,” Caitlin says.

Her leadership activities helped her grow in confidence and gave her the courage to take the next step—applying to the best graduate program in library and information science in the country according to U.S. News and World Report: the University of Illinois in Urbana-Champaign.

“I hadn’t expected, first, to go to graduate school, and then to apply to the top program in the country for my degree. It took a leap of faith and a lot of confidence for me,” says Caitlin, but her experiences at UIS had prepared her well.

Down one enticing rabbit hole after another…

At graduate school, Caitlin again worked in reference as a graduate assistant at the University’s Main Library.

Still curious about possible careers, she interned at the Rare Book & Manuscript Library, and during spring break, she spent time at the Spurlock Museum. She also worked at the Student Life and Culture Archives.

She says her interest in special collections first took root at the Lincoln Library in Springfield, but her work in Urbana cultivated that interest, leading to a Certificate in Special Collections.

In her job, she organizes the materials from each collection in a way that will be understandable to researchers, describes each piece, and then houses each for preservation.

“Some of the papers are administrative, like meeting minutes,” she says. “Others relate to specific moments in the hospital’s history—disputes with surgeons, for example, or reports related to a hepatitis outbreak—how they first discovered it, where it came from, how they treated it.

“I also processed the cornerstone contents from the original Jewish Hospital and have looked through scrapbooks with everything in them from dance invitations to newspaper clippings about doctors’ children.”

As the Project Archivist, she also provides reference support for an author who is writing a history of the three hospitals, and this is where her curiosity plays a crucial role.

Two examples of questions she has answered for the author:

Did the hospitals admit patients with contagious diseases? They were not supposed to, according to hospital rules, but Caitlin found an example of a congressman who contracted influenza while visiting soldiers in their barracks. The hospital not only admitted him, but allowed him—just hours before his death—to marry his secretary.

What happened to the first babies born at Barnes Hospital? While poking through an archival collection, I discovered the superintendent’s diary from 1914. It recorded the first two babies born at the Hospital after it opened (image at right), and of course, the author wanted to include that in her book. But she also wanted to know what happened to the babies, which meant I got to dive into old Census records to trace the two babies’ lives as far as I could. Robert Barnes donated the money for Barnes Hospit

“So there are just all sorts of questions to answer,” Caitlin says. “I tend to go down a rabbit hole with them because there are so many places to look for answers. Along the way, I catch glimpses into the lives and stories of people from the past, and that’s one of my favorite parts of the job.”

Additional pictures of Caitlin from her days at UIS: 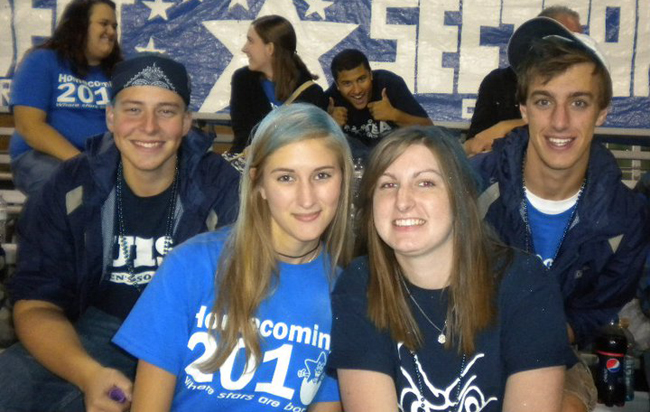