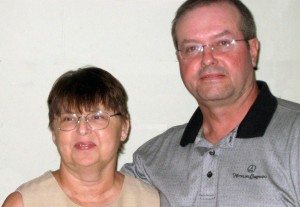 “I never could have imagined I would end up in management,” Bill says now.

He gives a lot of credit to UIS and especially to Dr. Ted Mims, who is head of the Computer Science Department.

In fact, Bill is so grateful to Dr. Ted Mims that he has created a scholarship fund in Ted’s name: The Ted Mims Scholarship Fund.

The same job for twenty years? Not Bill!

Bill got his first computer training in the US Army which he joined fresh out of high school. After his service ended, Bill began farming with his father, eventually specializing in hog farming and grain production.

His first job, which he took during the drought of 1982-83, was as an electronics technician at Burroughs, but he continued farming for a total of 14 years. “The farm seems almost like another life now,” he says.

At Burroughs one day, Bill asked some of the other technicians who had been with the company for up to 20 years what they had started out doing. Exactly what they were doing now, they told him.

He already had an associate’s degree, completed during his years of farming. He continued working full time, so it took him five years, but he earned his bachelor’s degree in 1993 from Excelsior University in New York, which gives students credit for classes taken locally.

What next after his bachelor’s?

The additional recognition and opportunities that Bill received with his bachelor’s degree caused him to think about going on for his master’s.

Bill says, “I’ve always thought that people who had a master’s degree must be very, very smart, so I thought, Boy, if I could get my master’s degree!!!!”

He started looking into a computer science degree at UIS as a way to learn more about computing technology.

“I met Dr. Mims (who was a young guy then!),” Bill says. “He presented the program so well, and I became convinced that taking one or two classes a semester, I could finish my master’s degree in six years.”

Bill progressed rapidly at UIS, spurred on by Ted’s encouragement. “I was an older student,” Bill says, “so he and I got along really well.”

Then Bill started his thesis and hit a roadblock. “About 18 months into it,” he says, “I just ran out of steam.”

It’s not hard to understand why.

Bill had been taking classes and working full time for years, and he now had two children he wanted to spend time with. “I literally did not type one word or attend one class for 18 months,” he says.

Up to that time, Bill had known Ted Mims as an excellent professor, a good resource and a great administrator for the Computer Science Department.

Now Bill would see the combination of tough love and supreme confidence in his students that has earned Ted such undying devotion among students and faculty. Ted kept in touch during Bill’s hiatus, and after 18 months, Ted finally cornered Bill.

“He gave me a pretty direct conversation,” Bill says. “‘Look, you’re so close to finishing. Knuckle down and get it done!'”

Ted also promised to help all he could.

After some critical feedback from Ted, some revisions, more back and forth, and his final defense, Bill finally had his master’s degree. 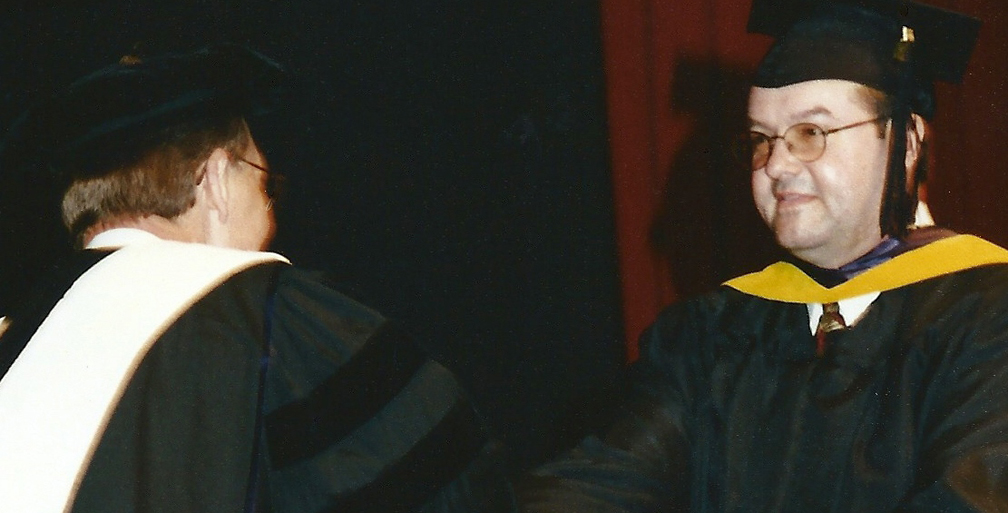 Bill speaks frankly about how important the degree has been: “That degree has made such a difference to me in my career at Microsoft. My goal when I came to Microsoft—which I thought was probably unattainable—was to be a Consulting Practice Manager and run a multi-state territory.”

Lofty goals, but that position and the multi-state territory is exactly what Bill achieved—and then he rose even higher to become a Senior Director.

Quite a change from a $50 annual income!

A professor who earns his students’ and faculty’s devotion

Bill recognizes that Ted’s interest and concern for his students is rare:

“Ted could have just let me drift away, but he didn’t. He grabbed me by the scruff of my neck, shamed me into continuing and then made sure I had the help I needed to finish.”

“What I always remember Ted saying to us was, ‘I have love and concern for all my students.'”

Tom Sidener, also on the faculty at UIS and an alum, concurs:

“He cares about every student and what they need. He is always looking to the future, trying to make the department better. He always wants the best for the students.”

Dr. Mims has now retired from UIS, but thanks to Bill Hoffman’s initiative, his name will be long be celebrated through a scholarship named in Dr. Mim’s honor.