Growing up as a child I was always asked one question that I am now realizing means so much to your success in life. What do you want to do when you grow up? There were so many options that ran through my mind as a third grader. I could be a doctor, lawyer, police officer, teacher, astronaut, and so many more professions. I would always answer that I wanted to be a teacher, simply because it seemed fun getting to tell people what to do. I never realized how much of a responsibility that job came with. As I started to progress in age I started really taking that question more seriously.

I was now attending a bigger school which meant new obstacles. I enjoyed school now simply because it was so much bigger, and the classes were even more intriguing. The class that stuck out to me most was environmental science. The teacher Mr. Riley, who was tall, had a big beard, and wore glasses, and always made the class interesting. When you’d walk in his room you saw plants, pictures of extinct animals such as dinosaurs, and one particular object that stood out to everyone the most. When someone walked to the back of the room, if you were to look in the corner there was a cage. This cage held one turtle, two rats, and one snake. The snake was the scariest because you would approach the cage and out of nowhere its tongue would pop up and start to slither.

The more time I spent learning about environmental science the more I became fond of the subject. I decided to stay after class on one particular Friday to ask Mr. Riley a few questions. Class was dismissed and I assisted by putting the chairs on the desk and swept up the floor because we’d just done an experiment. “So Mr. Riley why do you enjoy this subject so much?” I asked him this because I was very unsure how science could be this interesting. He told me that he actually didn’t have a passion for the subject until he hit his junior year of high school. He had one assignment where he had to go outside and find a frog; he would have to care for the frog for an entire week. After seeing how exciting nature and insects could be he really took the class more serious. He knew then that he wanted to teach this subject for the rest of his life. After hearing how passionate he was about this specific profession it really made me take a step back and analyze what I really enjoyed doing.

It took me until eighth grade to really say I know for sure that being a counselor is what I wanted to do when I grew up. I was now in the best class ever, which was health class. It was taught by Mr. Lowe and he was the funniest teacher in the world. There wasn’t one student who did not look forward to going to health class. No matter if you were having a bad day you were sure to be okay by the end of the day with Mr. Lowe because of his jokes. The classroom looked so fun because of the skeleton in the back of the class, posters of the human body, and even computers that you could use at any time. There were plenty of days that we would turn the worst day of class to the best because we would watch a movie instead of having a big lecture.

The entire class all appeared to be close to one another and we all would joke around with one another. If someone wasn’t having a good day it would be pretty obvious because the vibe was always great. There was one day that I was the only observant one in the class. Mr. Lowe hadn’t even noticed that the vibe in the class was so wrong. My friend Ashley sat across the room from me but I noticed that she wasn’t really into the lecture for the day. Her mind seemed to be somewhere else and her face was in a sort of a frown. I also noticed what she was wearing that day, which seemed very off to me. She had on a plain pair of blue jeans, and a big over sized Mickey Mouse jacket. It wasn’t uncommon for people to wear this type of clothing, but for Ashley it was because she would always dress up for class in pretty skirts and dresses. I knew at some point I would have to approach this situation because of our friendship.

I decided that I would wait for lunch to come around when we sat next to each other and shared laughs about boys, family, and the funny classes we had together. We walked to the cafeteria where they were serving pepperoni pizza with a side of French fries. That was everyone’s lunch favorite but it sure wasn’t Ashley’s on this particular school day. She hadn’t touched any of her food on her plate. “Hey are you okay, you seem a little down?” I finally thought of the words to say to start a conversation with her. It took her a minute to gather up an answer without sounding like she was about to cry. “I just lost a family member last night and it’s hitting me really hard.” All that came to mind was my great grandmother who I’d just lost the past summer. She was someone very close to me and I knew that I should share that story with Ashley. “I went through the same thing the past summer with losing my great grandmother, but you will get through it with faith.” Ashley looked up from the table and had the biggest smile as if she had just won the lottery. I felt great because I knew that I put that smile on her face. At that instant I knew just what I wanted to be in life with no questions asked.

A counselor sounded like the perfect fit for someone like me. I loved to help others with their problems and try to come up with the most positive solution so that everyone was satisfied. It always made me even more apparent that I wanted to do this when I made people go from a frown to a big smile on their face. Being a counselor requires many skills such as compassion, and great communication skills. My family always grew up teaching me to help someone out when I see that they are down so I knew for sure I had these skills down pact especially communication, and compassion. I also knew how to put myself in someone else’s shoes to actually feel what they were going through. If it were not for the opportunity that Ashley opened up for me I would still to this day be unsure of what I wanted to be when I grew up. I now say to this day that I couldn’t picture myself wanting to do anything else except for counseling. 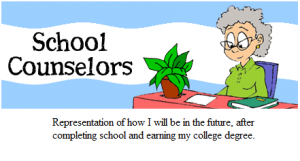