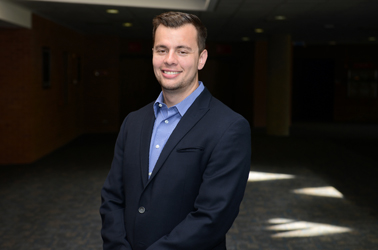 Josh Lawson is a man who plans ahead.

Growing up in a family with eight brothers and sisters, he decided fairly early that his only hope of going to college was joining the military, which would provide educational assistance for tuition and some fees.

So 5-1/2 years ago, he joined the Illinois Army National Guard.

He decided at the time to have his work in the Guard count for more than just educational assistance. He would use the time to develop skills for his career as well.

A career his mother approves of

Since Josh was “young…very, very young,” his mother has been telling him he should be a lawyer—probably because he’s so good at arguing.

With the law as his goal and given his special skills, Josh told the National Guard recruiter that he wanted to be an interrogator. He qualified for this competitive intelligence position by scoring high on the ASVAB (Armed Services Vocational Aptitude Battery).

Today, Josh still serves in the National Guard 2-3 days a month and several weeks in the summer. Over the years, he has honed his interrogation skills.

“I never raise my voice. Instead I like to be really smooth,” he says, moving his hand as if he’s smoothing an animal’s fur. “I just slide in points here and there and then at the end the other person says, ‘Yeah, I think you’re right.”

Time to take advantage of his time in the National Guard

After his first year of active duty with the National Guard, including six months in interrogation school, Josh returned to Springfield and took a job in sales.

As is typical for Josh, he was still planning ahead: The job gave him a chance to do some “paralegal-ish” work reviewing contracts.

Within a year or so, when the company folded, Josh decided it was time for college.

He enrolled at Lincoln Land Community College and two years later transferred to UIS for a legal studies major.

“I looked up legal studies programs in the United States,” he says, “and the program at UIS was #13 in the nation. And I was born and raised in Springfield, so obviously that’s a big perk.”

A plethora of legal activities

At UIS, Josh has invested a lot of energy in activities at UIS that have both developed his leadership skills and gone a long way toward preparing him for life as a lawyer, including:

“Eventually,” he says, “I want to work doing civil litigation representing insurance companies,” but he admits he’s open to other options.

A possible future in politics

One of those “other options” includes politics, and UIS has helped him prepare for that future as well.

This year, Josh is president of the Student Government Association (SGA) at UIS, a leadership role he equates with service.

“I decided to run for student government president,” he says, “because I really wanted to help out the students, and I found out this was the best way to do that.”

A primary goal as President is building a relationship between students and the SGA. When students know their leaders, he says, “if they have an issue, they’ll know who they need to go to for help.”

All these important leadership and career-building activities make it difficult for Josh to earn enough money during the school year to pay for extra expenses.

His military service provides assistance for tuition and some fees, and Josh also works both on campus and off campus, but finances can still be tight.

That’s where scholarships come in.

Mickey Rendok and Kathryn Eisenhart created their scholarship to help older students who enter college after a break.

They believe more mature learners like Josh (who is 24) often come to the classroom with a better appreciation for what is offered.

In fact, Kathryn Eisenhart, who taught Legal Studies for many years at UIS, says if she had a magic wand she would have each student working, being a volunteer or serving in the military before enrolling in college.

You can see why Josh is a great recipient of the Rendok and Kracaw Scholarship!

“This scholarship,” says an extremely grateful Josh, “is really helping to take the financial burden off during my final year at UIS. I cannot fully put into words my gratitude.

“Because of the scholarship I am able to really focus on my education and my preparation for law school next fall. This means more to me than the donors will ever know.”

Next year, Josh will graduate and head to law school. After all his careful planning, when he looks ahead, he does so with confidence that he’ll find success whatever the future holds.

We welcome your support in any amount for the Rendok and Kracaw Scholarship.