Give her the same advantages you gave me…

Before Melanie Clark’s father died, this was the request he communicated to his mother, Julie Clark (at right 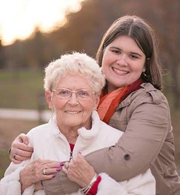 Melanie was only five at the time. In the coming years, her grandmother filled Melanie’s life with experiences that expanded Melanie’s world and gave her a much broader understanding of life—a cruise when Melanie was nine, the chance to take part in the People to People Ambassadorial Program in Australia during high school, other opportunities for learning and experience.

“She is always trying to push me to keep growing as an individual,” Melanie says, “to keep pushing myself forward and go after what I want to do.”

Possibly most important to Melanie’s future, Julie Clark introduced Melanie to UIS by bringing her to performances at the Sangamon Auditorium on the UIS campus.

“The first show I really remember was Lord of the Dance,” Melanie says, which she attended with Julie in 2009 at age 12.

And why were these Auditorium visits so important?

Because in high school, when Melanie’s computer science teacher suggested UIS, Melanie thought, Why not? I already know that campus.

That computer science teacher was Janis Rose, a professor in the Computer Science Department at UIS who also teaches at a local technical school. Ms. Rose assured Melanie that she would “flourish” at UIS, which Melanie has certainly done.

A career in technology

This year, Melanie completed her second year at UIS. Her major is Information Systems Security, a program within the Computer Science Department.

In a way, it was Julie Clark who led Melanie into this field as well. Melanie learned her earliest skills on her grandmother’s computer, installing programs and helping her grandmother when the Internet went down.

Melanie remembers a time when a computer store clerk offered to install a router for Julie for “only” $70. Melanie’s grandmother said no: “My granddaughter will do it. She’s good with computers.” And, indeed, after reading instructions in the manual, Melanie had no problems.

Melanie gives her grandmother credit for making college inevitable for Melanie: “She always said, elementary school, junior high, high school and then college. There wasn’t any other way for me to go.”

But Julie Clark does much more than encourage Melanie to attend college.

Julie also supplements Melanie’s earnings from an on-campus job by dipping into her savings, selling stock and cutting back on her own expenditures to help Melanie pay for college.

“She’s always been there for me,” Melanie says now of her grandmother, “through the toughest times when I was a little kid to now, supporting me in college.”

Both distinguished and generous

Because both Melanie and Julie have shared the expense of college, they also shared in the celebration when Melanie learned that she would be receiving a privately funded scholarship from UIS—the W. Robert and Patricia W. Felker Scholarship, created by the Felkers to help students with academic merit.

Robert Felker earned his bachelor’s degree in Political Science from UIS (then Sangamon State) in 1974, and went on to a distinguished career in banking. He received the University of Illinois Alumni Achievement Award in 1997, and this year, in recognition of his service to UIS, he also received the William E. Winter Award for Outstanding Advocate Leadership from the University of Illinois Foundation.

“My grandma cried when I told her I was getting the Felker scholarship,” Melanie says, who thanks the Felkers profusely. “It means we don’t have to pay so much out of pocket or take on so many loans.”

In the future, Melanie will have a job helping to defend networks from attack, but whatever she does, she knows she’ll be doing it close to her grandmother.

After receiving so many advantages from her grandmother, Melanie is eager to return the goodness!

At UIS, anyone can make a gift that adds to the size of a scholarship award. We welcome your gift in any amount to the W. Robert and Patricia W. Felker Scholarship Fund. Use the links to give safely online.

5 opportunities that led to success for Janell Mathus