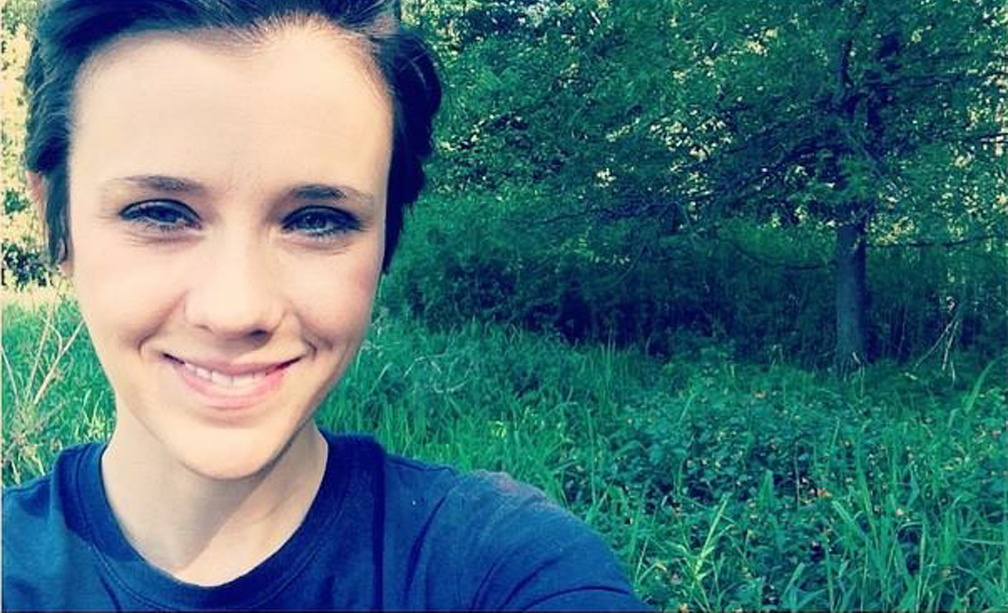 But the next day, a kidney doctor called.

“Dana, you are in end-stage renal disease (ESRD). You need immediate dialysis.”

Dana, who loves nature and wants to work outdoors, thought her life was over.

Then she took a deep breath and decided to do what she could to make her new life work. 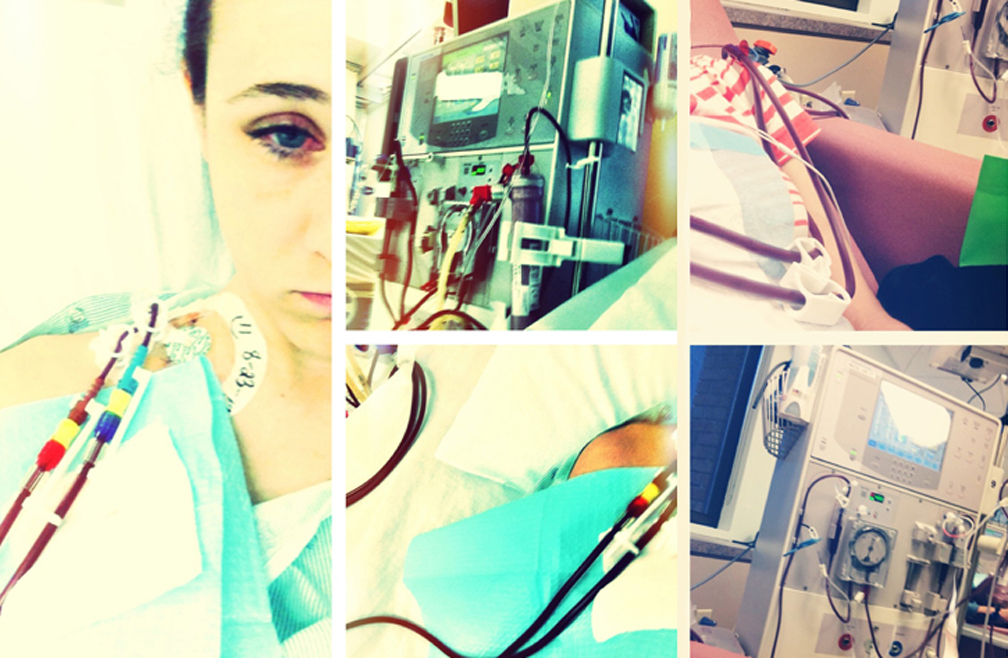 Another year off from school

Dialysis started right away. Because she had to travel three times a week to a dialysis center and then stay for four hours of treatment each time, returning to UIS for her junior year wasn’t an option.

This was particularly hard on Dana because she had already her college degree for so long.

After one year of college following high school, Dana decided to take some time off to figure out what she wanted to do with her life.

“That time off turned into a lot of time off,” she says.

Six years later, at 25, her father suggested she come live with him in Springfield and attend school in Illinois. With her plans firmly in place—she would major in Biology—she enrolled at UIS and thought she was finally on her way to a career that  focused on nature.

Now, just a week before her junior year classes were scheduled to start, she had received her ESRD diagnosis. I will have to put college on hold again! she thought.

Then, with her doctors’ help, Dana was able to transfer to at-home peritoneal dialysis, and hope returned.

“I do the dialysis every night while I’m sleeping,” she says. “I hook it up before bed and when I wake up, I’m free all day.”

Doing what she had to for UIS to work

Last year, in 2014, Dana returned for her junior year, but she came needing help.

“On the outside, I look normal,” she says, “but I have a lot of things going on that people don’t know about. I was uncomfortable asking for help. I’m just not that kind of person. But I knew I had to if this was going to work.”

Fortunately, staff at the UIS Office of Disability Services made Dana feel instantly comfortable. “They gave me lots of options of what I could say to professors about my health and actually typed everything up for me.”

Most importantly, professors needed to know she might miss a test for medical reasons, and even more so if she gets the “we have a kidney for you” call.

“My professors have all been great,” Dana says. “They’ve told me that if I have problems, I can have an incomplete and can come back and finish up anything I have left to do.”

Unlike her first year at UIS, however, Dana no longer works. She wishes she could (there’s that independent streak again), but she feels like she should probably just focus on school.

End-stage renal disease is considered a disability, and because at the time of her diagnosis she had been working full time since she was 15, she now receives disability payments each month. “I still felt odd not working,” she says, “because that’s just me, but I’m fortunate that I don’t have to.”

This year, to help with additional payments not covered by disability, Dana applied for UIS scholarships. She received the Friends of UIS Scholarship for Students with Disabilities, provided by an anonymous donor and a second scholarship…

Dana McCarver (in red) with her mother, Deb McCarver (left) and scholarship donors Carol Esaray and Gary Bach at the 2015 Scholarship Luncheon

Clark and Carol Esarey and their son, Gary Bach, created the Esarey and Neland scholarship to honor Clark’s and Carol’s mothers.

Carrie Gibson Esarey, who was raised by a single mother, taught for many years in a one-room schoolhouse, and Dorothy Neland was also a champion of women’s independence. Her recipe for achieving this was education, education, education. With her encouragement, Dorothy’s two daughters–one of them Carol–were the first women in the family to earn college degrees.

The Esareys and Gary Bach want their scholarship to help women, especially women who have children, who have a disability, or whose child has a disability.

Dana had a chance to meet Carol and Gary at the 2015 Scholarship Luncheon. “Carol Esarey is such an interesting woman,” Dana says. “It was great to talk with her and hear why they give the scholarship.”

Dana was especially interested to hear about the Esareys’ many travels around the world. “She’s been to Antarctica!” Dana exclaims. “Traveling is something I have always wanted to do.”

What the future holds

You might think that with the surprises life has presented to Dana that she would be hesitant to speak about the future. Not Dana.

This fall, she’s in Arkansas (“some things came up,”) and taking classes online, but she is scheduled to graduate after the fall semester in 2016. “Then I plan to go right into a graduate program,” she says.

Dana continues to work toward a biology major and has been very active in the Biology Club, a student organization at UIS. She has recently added an environmental studies major to her program because her career plans include working in conservation—”something related to sustainability”—that also involves animals. 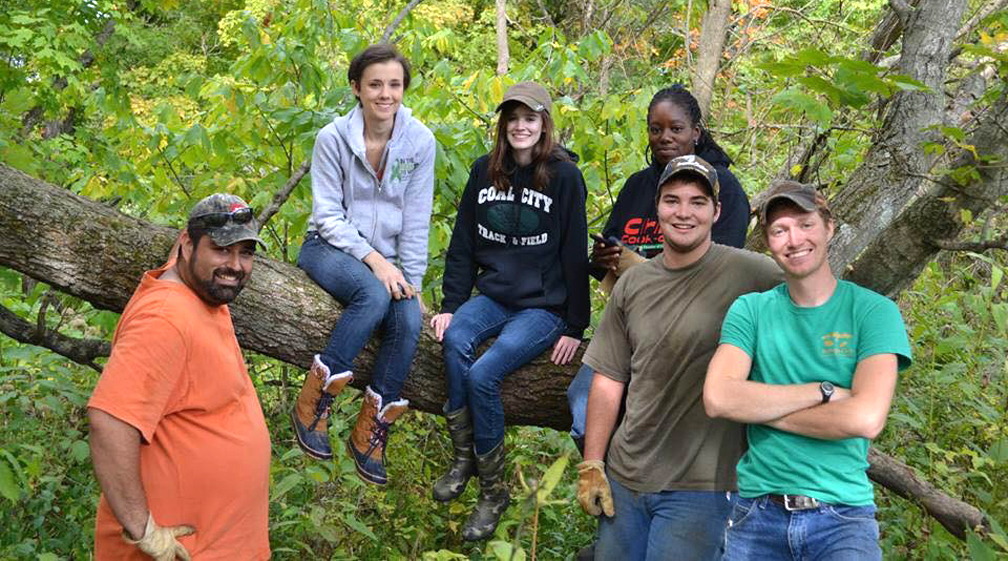 Dana (second from left) with members of the UIS Biology Club on a service project at Jubilee Farm in New Berlin, IL

Dana’s future will also include rock climbing, an activity she “really loves.” Take a look at the pictures below of Dana rock climbing!

And given her penchant for travel, she would love to find jobs that take her someplace new.

But wherever she goes, whatever she does, Dana refuses to believe her health will limit her in any way.

“That’s what’s cool about the portable dialysis machine,” she says. “I can do the dialysis anywhere, camping or out in a wilderness, even without electricity. If I have to, I can do it myself using gravity.”

I can almost hear Carrie Gibson Esarey and Dorothy Neland, who both championed women’s independence, cheering Dana on!

We welcome your support in any amount to the Carrie Gibson Esarey and Dorothy Neland Scholarship Fund.